Launched back in April this year, the Mi 6 flagship – Xiaomi Mi 6 – smartphone packs an octa-core Qualcomm Snapdragon 835 SoC clocked at 2.45GHz coupled with Adreno 540 GPU. The Xiaomi Mi 6 display measures 5.15-inch diagonally and sports full-HD (1080×1920 pixels) resolution. Its maximum brightness is 600 nits, but the brightness can be reduced automatically down to as low as 1 nit to reduce eye-strain. Xiaomi Mi 6 camera features the dual camera setup at the back. It sports dual 12-megapixel rear cameras, a setup reminiscent of the iPhone 7 Plus.

The phone features a 12-megapixel wide-angle lens and another 12-megapixel telephoto camera for 2x lossless zoom. With 3350mAh battery, Xiaomi Mi 6 has features such as front-firing dual speakers, Bluetooth 5.0, dual-SIM support (4G + 4G/ 3G/ 2G), 8-megapixel front camera with 1080p video capture at 30fps, and slo-mo videos.has only been available in a single 6GB RAM option. However, that changes now as the company has officially announced a new 4GB RAM model for the flagship device. 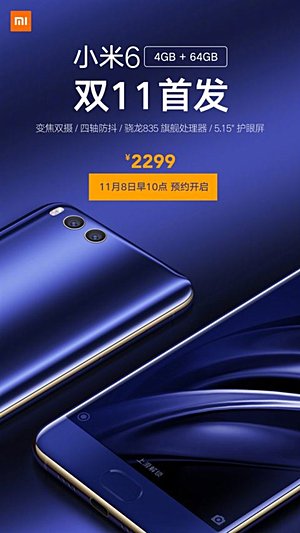 The variant, which comes with 64GB storage, carries a price tag of CNY 2,299, which currently translates into around $350. China will be the first market to get the 4GB model, and it will go on sale starting November 11.